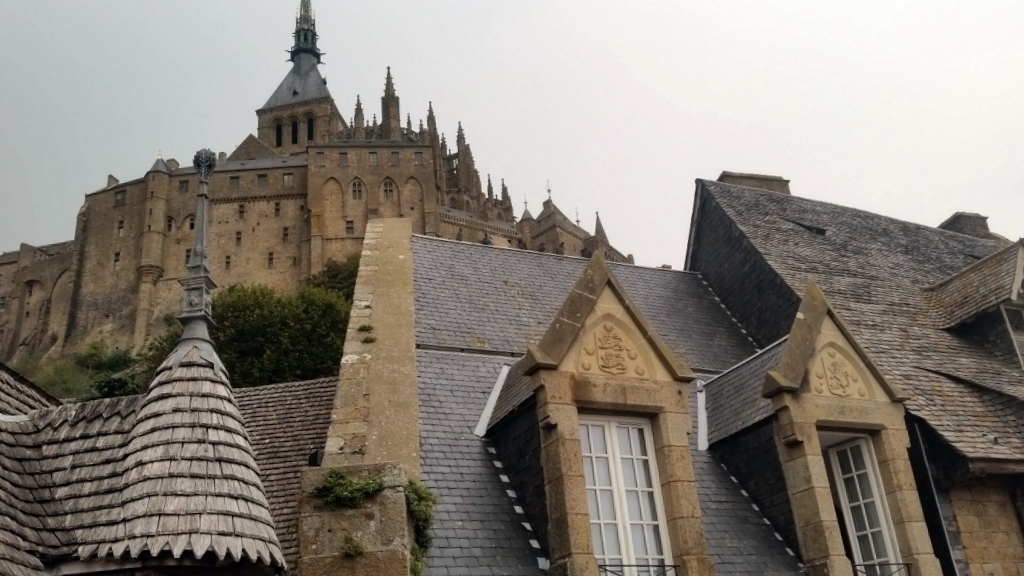 2017 – You will travel in a land of marvels – Mont St Michel
The above quotation by Jules Verne could so easily have been coined to describe Mont St Michel in Normandy, the first true marvel of this 2017/2018 trip. No matter how many times you visit, and this is our fourth, you are bound to stare in amazement and admiration at this “Wonder of the Western World”, a Gothic-style Benedictine Abbey dedicated to the archangel St Michael, and the village that grew up in the shadow of its great walls. Built for the most part between the 11th and 16th centuries, the Abbey is a technical and artistic tour de force, having had to adapt to the problems posed by this unique natural site. If you are religious, it is a superb setting to worship, if not, then you can simply marvel at the skill of the builders, who some 600 years ago, managed to not only transport stone here from some distance, but then raise the blocks to such an impressive height and form such a spectacular structure.

Le Mont-Saint-Michel is an island commune in Normandy, France. It is located about one kilometre (0.6 miles) off the country’s northwestern coast, at the mouth of the Couesnon River near Avranches and is 100 hectares (247 acres) in size.

The island has held strategic fortifications since ancient times and since the 8th century AD has been the seat of the monastery from which it draws its name. The structural composition of the town exemplifies the feudal society that constructed it: on top, God, the abbey and monastery; below, the great halls; then stores and housing; and at the bottom, outside the walls, houses for fishermen and farmers.

The commune’s position — on an island just 600 metres from land — made it accessible at low tide to the many pilgrims to its abbey, but defensible as an incoming tide stranded, drove off, or drowned would-be assailants. The Mont remained unconquered during the Hundred Years’ War; a small garrison fended off a full attack by the English in 1433. The reverse benefits of its natural defence were not lost on Louis XI, who turned the Mont into a prison. Thereafter the abbey began to be used more regularly as a jail during the Ancien Régime.

One of France’s most recognizable landmarks, visited by more than 3 million people each year, Mont Saint-Michel and its bay are on the UNESCO list of World Heritage Sites. Over 60 buildings within the commune are protected in France as monuments historiques.

The Mont was a must visit site when planning this trip and yet again it did not disappoint. Even though we were visiting in mid October it was still busy with tourists, but thankfully, not as packed as it is in the height of the summer. Since our last visit there has been a massive reconstruction to the approach and the car park has been moved away from in front of the Mont to a couple of miles away and you can either walk, cycle as we did, take the shuttle bus, or take the slow option of taking a horse drawn cart.

I made a cycle-cam video from the visitor centre to the the Mont and you can see it HERE. What the video and some of the following photographs clearly shows is the flatness of the landscape for miles in any direction and the mud and sand that surrounds it. The tide rises and falls by an amazing 46 feet and obviously rushes in, making it dangerous to be on the sand on an incoming tide.

We are fortunate to be able to visit such an inspiring monument to the human spirit and the endeavour and skill of the workers who toiled to build it so long ago. Back in the day there would have been places where the Pilgrims to the Abbey would have been fed and watered, today to get to the summit you pass by the many tourist trap souvenir shops and eateries, but that is a small price to pay to visit such an inspiring monument.

The ramp you see on the left was for a trolley to be winched up with supplies etc. Today its a zip wire that does the same function out of view to the left.

Its when you see a view like this you wonder how the stone was transported here and raised to such a dizzying height.