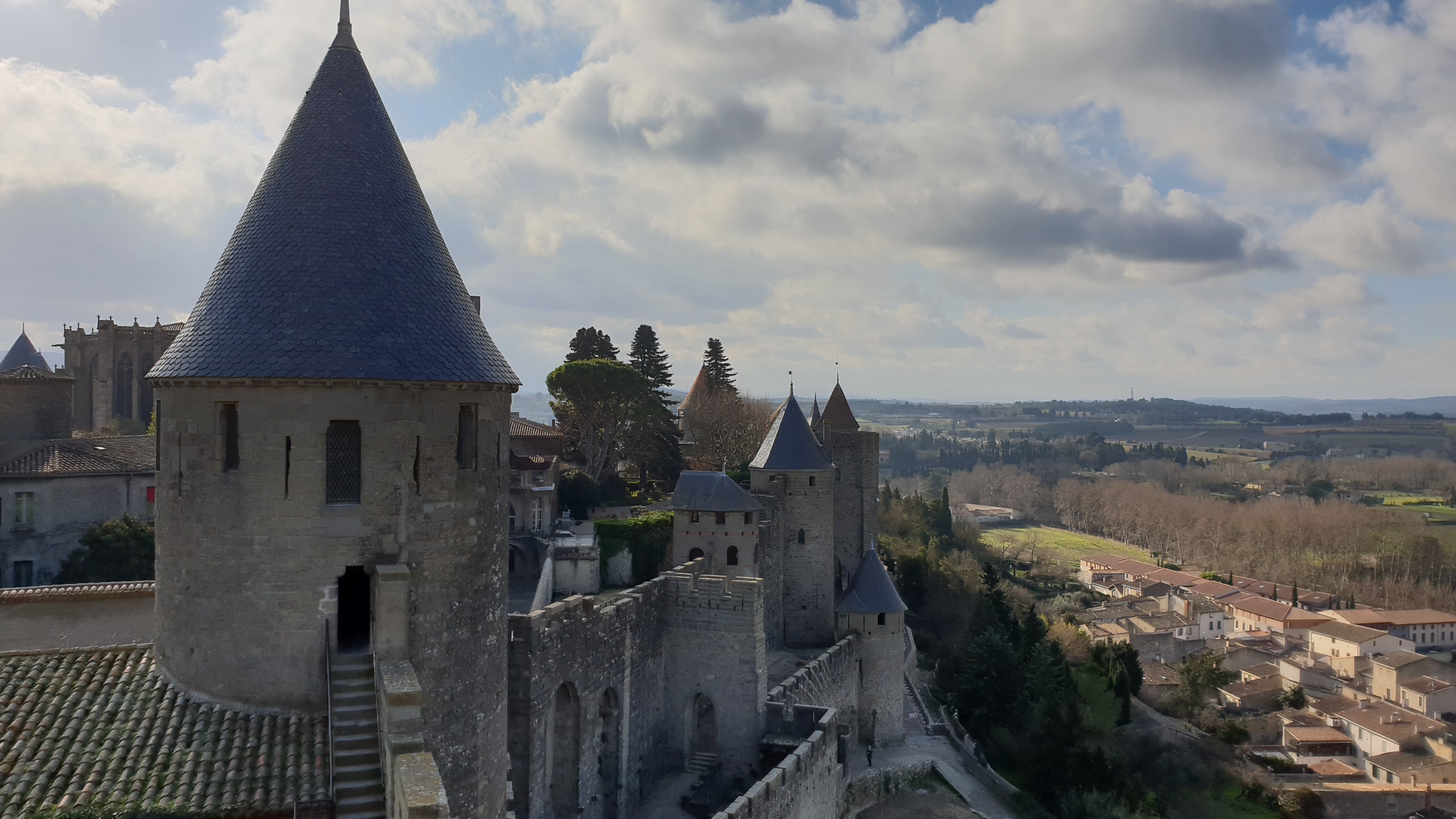 2019 – You will travel in a land of marvels – Carcassonne
On our six month trip last year we encountered two ‘marvels’ in all that time, Mont St Michel and the Alhambra Palace, but on this trip we have been to two in a week, the Palace of Versailles, and now Carcassonne, and this one did not disappoint either.

Yesterday afternoon we had a brief walk around the city centre of Carcassonne which is on the opposite side of the river Aude from the castle. Today we were visiting the castle, or Cité , as its referred to here, before heading down to the Mediterranean coast later this afternoon.

The sky was not as leaden grey today (10/01/2019), and, believe it or not there were flashes of blue in the sky early on. Quelle surprise! We set off for the Cité, the impressive castle that dominates the city and the surrounding countryside and I think we were amongst the first to gain entry which was part of the plan as I could take pictures without anyone getting in the way!

You can walk round the enclosed fortifications without paying and there are loads of restaurants, gift shops, and the like to relieve you of your hard earned euros, but few were open this early on a cold January morning. Did I just say cold? Try freezing cold with a wind chill that brought tears to your eyes. The Languedoc region is by far the windiest area in all of France and today’s wind is known as Le Vent Cers and it blows down from the mountains to the west, where what we could have done with is Le Vent Marin, the warm summer wind from the Mediterranean Sea, but not much chance of that in early January!

What made it much worse of course was that the castle is perched on top of a hill, as most castles tend to be, and that made the wind stronger and colder. But when in Rome, or Carcassonne even, the ramparts have to be climbed, and the stunning views enjoyed. A word of warning though. If you read this, see the pictures and put Carcassonne on your bucket list to visit one day then there are a few things to consider. Apparently in the summer you can hardly move for fellow tourists, then there are the access issues as once you pay your €9 a head entrance fee, the route you take has an endless (it seemed) number of steps to go up and down, so maybe give the inner castle tour a miss if you have dodgy knees, hips, heart or don’t like heights!

The castle has three kilometres of concentric outer walls you can walk round and fifty two towers making its outward appearance look like a fairy tale castle. This picture was ‘borrowed’ from the internet to show the true scale of the Cité but all the other pictures are mine.

The following three pictures show the scale of the outer walls and a few of the towers.

The Romans were first to recognise its strategic importance and they occupied the hilltop and were the first to try and fortify it but it was not until the 12th century that building started in earnest and it had its fair share of invaders and occupiers, too numerous to mention. What we see today is an accumulation of different architectural styles that make it so unique.

The entrance to the Cité complex is equally as impressive as the outer walls and befits the stature of this magnificent structure.

From the entrance you enter a narrow lane of mostly gift and souvenir shops, the majority of which were closed, either for the season or the early hour.

Of the 22 wells supplying the City, this is considered to be the oldest. Its surrounds are XIVth century and its columns and ironwork date from the period of the Renaissance. One legend has it that the Visigoths, fearful of the arrival of Atilla, hid the treasure from the Temple of Solomon in it. It has been excavated many times, but always in vain!

There is a 3D audio visual film and a large model of the Cité to give you some background to the evolution of the buildings and ramparts down the centuries and then you proceed through some rooms with statues and other artefacts from the past.

From there its out onto the ramparts to take in the view both internally into the Cité, and externally out over the city of Carcassonne and the surrounding countryside.

The views externally were stunning but it was hard work inside the turrets going up and down the narrow circular stairways. The internal views from the walls were interesting as well and the following picture shows the Théâtre de la Cité.

The theatre was established in 1908, on the site of the former Saint-Nazaire cloisters. Originally it had seating for around 6,000 people (around 3,000 permitted today) and the spectators were seated on benches or simple chairs. In 1957, the actor and director Jean Deschamps set up the famous Festival de la Cité, which ever since has taken place each summer.

The earliest authentic document mentioning this church dates from 925. In 1096 pope Urban II came to Carcassonne and blessed the stones of the cathedral of Saint-Nazaire and Saint Celse. The building was completed during the first half of the XIIth century. It was rebuilt several times and then in 1801 it lost its cathedral status to the Saint-Michel church in the Bastide. In 1898 it received the title of Basilica from pope Leo XIII.

It was freezing cold and although this next picture shows blue skies, do you think The Navigator looks warm and cosy?

We found a coffee shop and we had a couple of hot drinks to try and thaw us out a bit and it had the desired effect – until we stepped outside again!

Set high up on a hill, Carcassonne’s ancient walled city is Disneyworld-perfect. This fairytale collection of drawbridges, towers and atmospheric cobbled streets was reputedly the inspiration for Walt Disney’s The Sleeping Beauty, and it’s a must-see on any trip through this part of southern France
heading for the Med coast or northern Spain it is well worth a visit. It was added to the UNESCO World Heritage list in 1997.

I should also mention that there is a motorhome Aire within walking distance of the town and Cite and the map co-ordinates are,
43.199792, 2.352763
It has water services and dumping but no electric although the Aire borders a campsite, Camping de la Cite, if you need power.