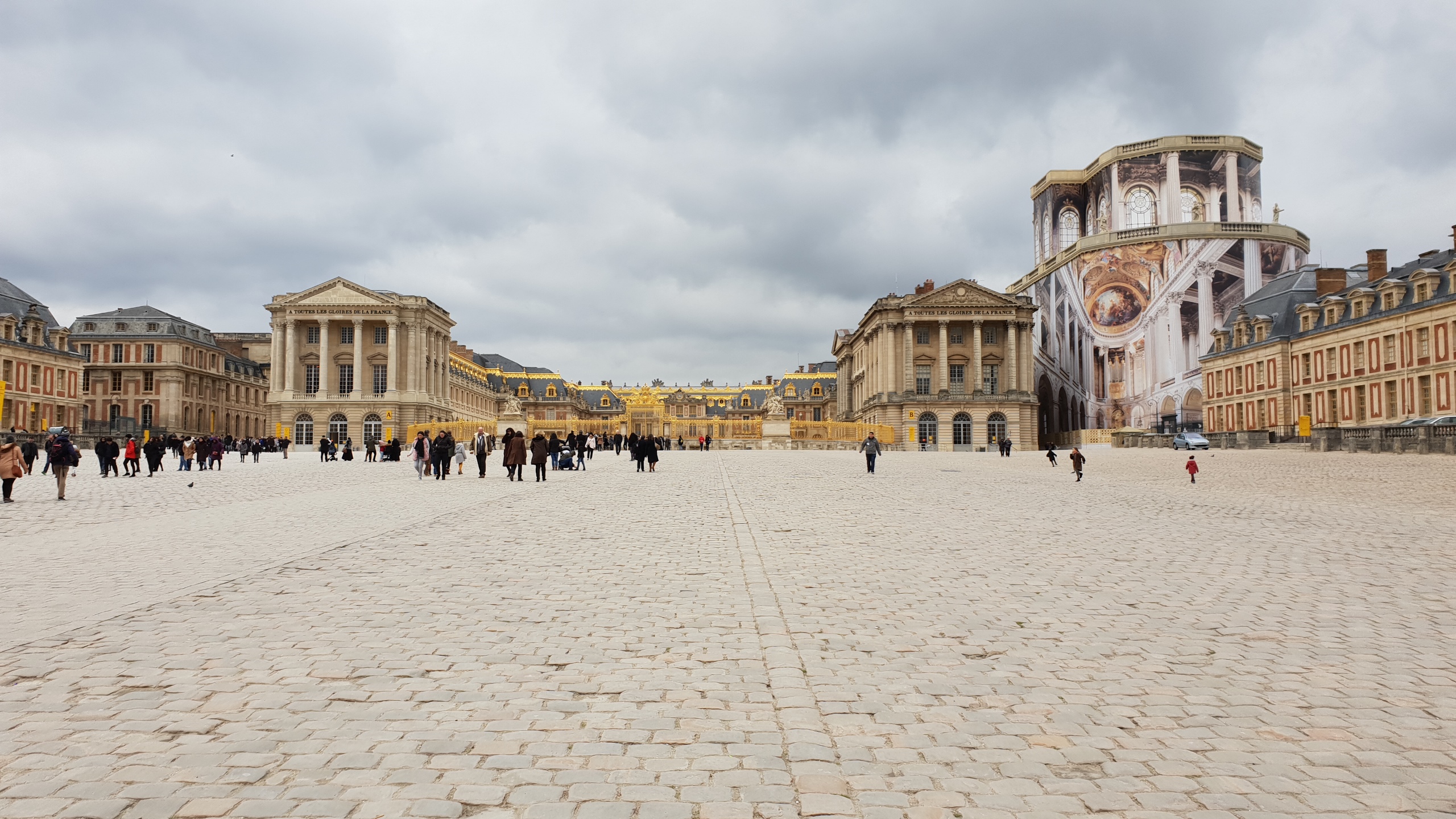 2019 – You will travel in a land of marvels – Versailles
Regular followers of this blog will know that once in a while on our travels we visit somewhere so special that it requires its own extended page and The Palace of Versailles is the third to warrant that honour after Mont St Michel in northern France, and The Alhambra Palace in Granada, Spain.

I had researched the logistics of getting a motorhome near to Versailles and found that there was a car park that was only a ten minute walk away from the Palace and was free to stay overnight as the charges only applied during the day. The upside was its location, however there were a few downsides as well. The first was actually getting there, then there was the noise then the cost of the car park. But then again imagine parking your motorhome 10 minutes walk from Buckingham Palace or somewhere like that so for convenience this parking spot takes a bit of beating.

The journey down from La Mailleraye sur Seinne took about two and a half hours and we stopped at a huge Auchan to buy a few things, fill up with fuel at £1.22 a ltr. and have lunch.

We arrived in the town of Versailles in mid afternoon and the sat nav was talking me through the directions I needed to take until I saw the road ahead had a barrier across to prevent traffic entering because of a street market. The only alternative was to turn right before the barrier but it was too narrow to turn Bessie into! The market was finished and they were packing up and enough of a gap had been left to get the traders vans through to pick up their gear so I squeezed past as well and although we got some strange looks we made it through!

I had read online that you can stay overnight in a car park close to the Palace, so once we were safely parked up in the car park we headed for the Palace to get our bearings for our visit tomorrow morning and have a wander in the grounds. The massive grounds (over 2,000 acres) are free to enter although you have to pass through a security point first where your bags are examined. The following picture was taken just after passing through the security check point and shows the scale of the Palace complex.

The whole Palace complex is massive and very impressive and no expense has been spared on the gold paint, or the gold jacket!

The gardens are about the size of a small town and were designed to impress, which they certainly do, with 55 fountains from the late 1600s still in place, but not working in the winter unfortunately. In the summer 32 of them feature in a musical fountain show. The gardens are at the rear of the Palace so we walked round to briefly see them.

In the winter the fountains are turned off and the hundreds of statues are all wrapped in tarpaulins to prevent frost damage. The gardens are impressive in their scale and layout but obviously not as colourful as they would be in the summer. It was grey and freezing cold but there were still huge crowds with the now inevitable tours of Chinese and Japanese visitors.

As it was beginning to get dark we headed back to Bessie to thaw out and settle in for the night and a fairly early rise, for us anyway!

When we arrived back at the van there was about half a dozen teenagers in the car park near us making a noise as they practised their skateboard tricks, but they headed off as the temperature dropped. Later when we were in bed reading we could hear voices just behind the van but I could not see them as Bessie does not have a window on the rear. I got up to put the rear cameras on but that needs the ignition to be switched on so when I started the engine I could see two youths move away from right behind the van. I got dressed quickly to go out and see what they had been up to fearing Bessie might be sporting some form of graffiti artwork by an aspiring Banksy, but all was well and I stood outside until I saw them leave the area.

I had booked the tickets online (€20 each) and they were for an 11am entry to the Palace so we left early in the semi darkness to get in and see more of the grounds before getting into the buildings. The grounds are all to the rear of the Palace and seem to stretch as far as the eye can see and we walked down to the great lake where there were people rowing, making use of the large expanse of water.

One of the odd things to see were four very heavily armed soldiers walking very slowly on patrol near the Palace, as you would expect at such an iconic tourist attraction. What was so odd however was their height, they were tiny and not what you expect to see in an army uniform.

We went early to the Palace entrance as we were not sure if our etickets had to be printed off but they were scanned from my phone instead. Security is tight and you and your bags go through airport style scanners.

The Palace of Versailles was the principal royal residence of France from 1682, under Louis XIV, until the start of the French Revolution in 1789, under Louis XVI. It is located in the department of Yvelines, in the region of Île-de-France, about 20 kilometres (12 miles) southwest of the centre of Paris.

“The palace is now a Monument historique and UNESCO World Heritage site, notable especially for the ceremonial Hall of Mirrors, the jewel-like Royal Opera, and the royal apartments; for the more intimate royal residences, the Grand Trianon and Petit Trianon located within the park; the small rustic Hameau (Hamlet) created for Marie Antoinette; and the vast Gardens of Versailles with fountains, canals, and geometric flower beds and groves, laid out by André le Nôtre. The Palace was stripped of all its furnishings after the French Revolution, but many pieces have been returned and many of the palace rooms have been restored. In 2017 the Palace of Versailles received 7,700,000 visitors, making it the second-most visited monument in the Île-de-France region, just behind the Louvre and ahead of the Eiffel Tower.“

The immediate thing that impresses is the scale of the building and the height of the huge long corridors and rooms. The first rooms we saw were those of two of the daughters of Louis XV and they were as beautifully decorated as you would expect, however, after the French Revolution most of the contents and furniture was sold off by the new Republican Government so there are few original pieces to see. The next two pictures are from the rooms occupied by two of Louis XV daughters and the larger picture is the Royal chapel.

The room that stands out however is the amazing gallery of mirrors, one of the most famous rooms of any building in the world, and given the era it was built in, makes it even more impressive. Louis XIV had tremendous vision and an unlimited budget and the result still dazzles to this day.

The whole length of the Hall of Mirrors (73m) pays tribute to the political, economic and artistic success of France. Political successes are illustrated through the 30 painted compositions on the vaulted ceiling by Le Brun, which depict the glorious history of Louis XIV during the first 18 years of his reign. French economic prosperity is revealed in the number and size of the 357 mirrors bedecking the 17 arches opposite the windows, demonstrating that the new French manufacture could rival the Venetian monopoly on mirror manufacturing.

The other impressive rooms were the Gallery of Great Battles, an exhibition of paintings from a later period, mostly of France’s military battles and conquests and as you can see in the following pictures, some of the paintings were of a truly impressive scale. To be fair, The Navigator is not the tallest person you will ever meet, but even so, she is dwarfed by the size of the paintings. No Battle of Waterloo paintings though…

When we were in the galleries and rooms it was possible to look out over the gardens at the immediate rear of the Palace and their intricate design.

There was so much to see that we only really got to savour a part of this unique building and one day is not enough to take it all in.

“In an attempt to gain some brief respite from courtly etiquette, the kings of Versailles built themselves more intimate spaces close to the main palace. Adjoining the Petit Parc, the estate of Trianon is home to the Grand Trianon and Petit Trianon palaces, as well as the Queen’s Hamlet and a variety of ornamental gardens.

Construction on the estate began under Louis XIV, who had the Grand Trianon Palace built at the far end of the northern branch of the Grand Canal. The estate is perhaps most closely associated with Queen Marie-Antoinette. The wife of Louis XVI regularly sought refuge at the Petit Trianon, where she commissioned marvellous landscaped gardens centred around a hamlet of cottages built in the rustic style then in vogue. Designed for more intimate moments, this royal estate contains architectural gems and magnificent gardens whose diversity and ornamentation give it a unique charm.”

We headed back to the van in mid afternoon, but before that we stopped in at the Royal Gallery of Coaches, a free exhibition near the Palace, and as you would expect, it housed a superb collection of coaches, carriages and sleds of the period.

Bessie was actually parked behind the above Gallery of Coaches and it was a good job – my feet were killing me! The parking was expensive at €24 but that included the overnight stay, and maybe we could have found somewhere cheaper further away, but for ease of access this suited us. We headed off to Dreux for a couple of nights which was only an hour away.

If anyone intends to visit Paris I would recommend jumping on a train out to Versailles, but come early and make a day (or two) of it – there is so much to see!

PS. Watch this space for another ‘You will travel in a world of marvels,’ coming to a blog near you soon – Carcassonne