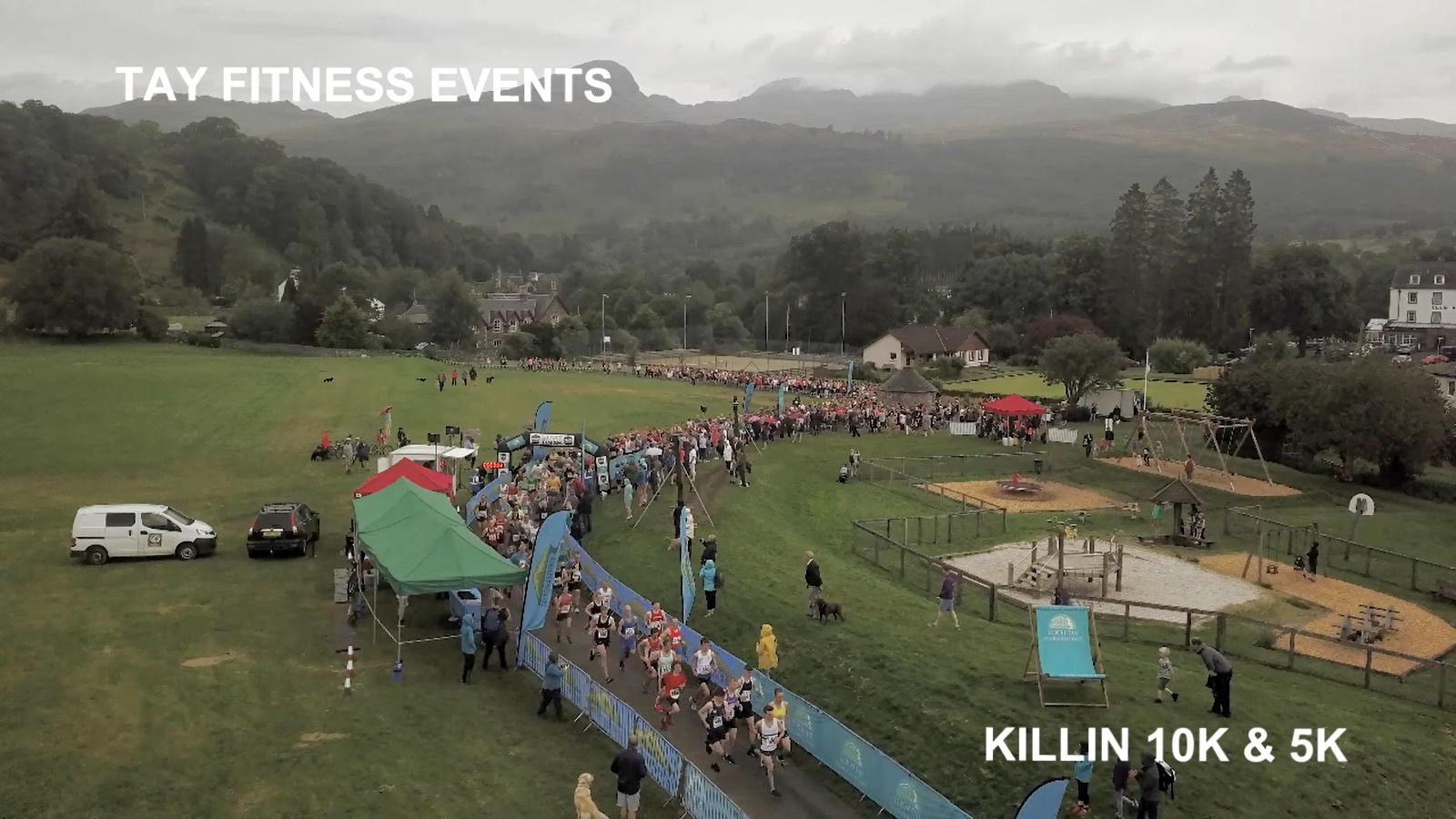 We left Ardrishaig on the Friday afternoon after The Navigator returned from working at Inveraray that morning and it took just short of two hours to reach Lochearnhead where we were staying for the next two nights.

It takes an immense amount or organisation to put on an event on this scale and Iona and Pete were up at the crack of dawn to head over to Killin to set up the start / finish area and make sure the dozens of people who help them on the day were briefed and in position for the start at noon.

I’ve had a 50% success rate in flying the drone to film the event due to a monsoon at the first event of the year and today started off dry, although it was grey and overcast. My mission was to fly the drone at the start and then jump in a car and head up a glen to film the runners on the way back to the village.

The Navigator was given two jobs…

In the morning on the run up to the start of the race at twelve o’clock she was giving the runners a free sample of Active Root, a natural ginger sports drink which was supposed to give the runners more energy for the race ahead.

Just as the race was about to start, the rain, which had been threatening, began to spit. The drone is crammed full of sensitive electronics and sensors and you are not meant to fly it if it’s raining but I decided to chance it and the following film is the result.

I had also set up the GoPro camera on a fence post and it captured the following images of the runners setting off, the ‘elite’ runners to the fore and the not so elite runners to the rear. There were over six hundred competitors and it took over two minutes for them all to pass the start line.

Once the race was underway The Navigator came over to the bar gazebo where she learned how to pull a pint for the first time in her life.

After completing the course, the runners can have either a soft drink or a free pint which is sponsored by Belhaven Breweries and here you see The Navigator dispensing the free pints to the runners on their return.

Given that these are all health and fitness conscious people, I was surprised to see a high proportion of the runners keeping The Navigator busy pouring pints for a good hour after the race. Mind you it is a FREE pint and this is Scotland!

As soon as I landed the drone I headed off out of the village to try and capture some more drone footage of the runners heading back through the magnificent scenery. Unfortunately the only place I could get parked was near to overhead power lines which limited the range I could fly. The rain had not come to much and I managed to get some more drone footage before the batteries died on me.

Once all the runners had returned safely and were refreshed they congregated in the packed McLaren Hall and Pete presented the winners of their various categories with their prizes.

Killin is a small village at the Falls of Dochart, a spectacular series of rapids, at the western end of Loch Tay.

The village makes an excellent base for walks in the surrounding mountains of Breadalbane while Loch Tay is a popular destination for both its salmon fishing and watersports. Killin sits at the edge of the Ben Lawers National Nature Reserve and the Loch Lomond & The Trossachs National Park, so you can enjoy a lovely mix of wildlife spotting, outdoor activities and walking.

Nearby you will find the ruins of the Campbell stronghold of Finlarig Castle and the Moirlanich Longhouse, a rare surviving example of a traditional Scottish longhouse, maintained by the National Trust for Scotland.

The village offers a variety of accommodation, places to eat and local convenience stores. The Killin Outdoor Centre and Mountain Shop have a variety of outdoor equipment for hire and sale and can provide excellent knowledge for things to see and do in the area.

For those with a motorhome or caravan, there is a Caravan & Motorhome club site on the banks of the river Lochay in the village itself. Down the years we have been to the Maragowan site many times as it was just over an hour from where we used to live and here are a few snaps from 1989…

…and 2007. These pictures show the impressive Falls of Dochart. We were living near Loughborough at this time and these pictures were taken on a trip back to Scotland in Louis the McLouis to visit some of our favourite camping spots from our early caravanning days.

The usual start to any trip is to visit The Navigator’s mother but this time we went to visit her on the Sunday morning at the end of this trip before heading to Aldi to stock up again before heading home.

By mid afternoon I was gagging for a cup of tea and we would have stopped in the car park at the top of the Rest and be Thankful but the catering van wasn’t there so we drove on and stopped beside Loch Fyne at Furnace for The Navigator to brew up.

And, as The Navigator is working again the following week I will be off somewhere for a week in Bessie from the 16th of September. I’m looking forward to it if it ever stops raining…