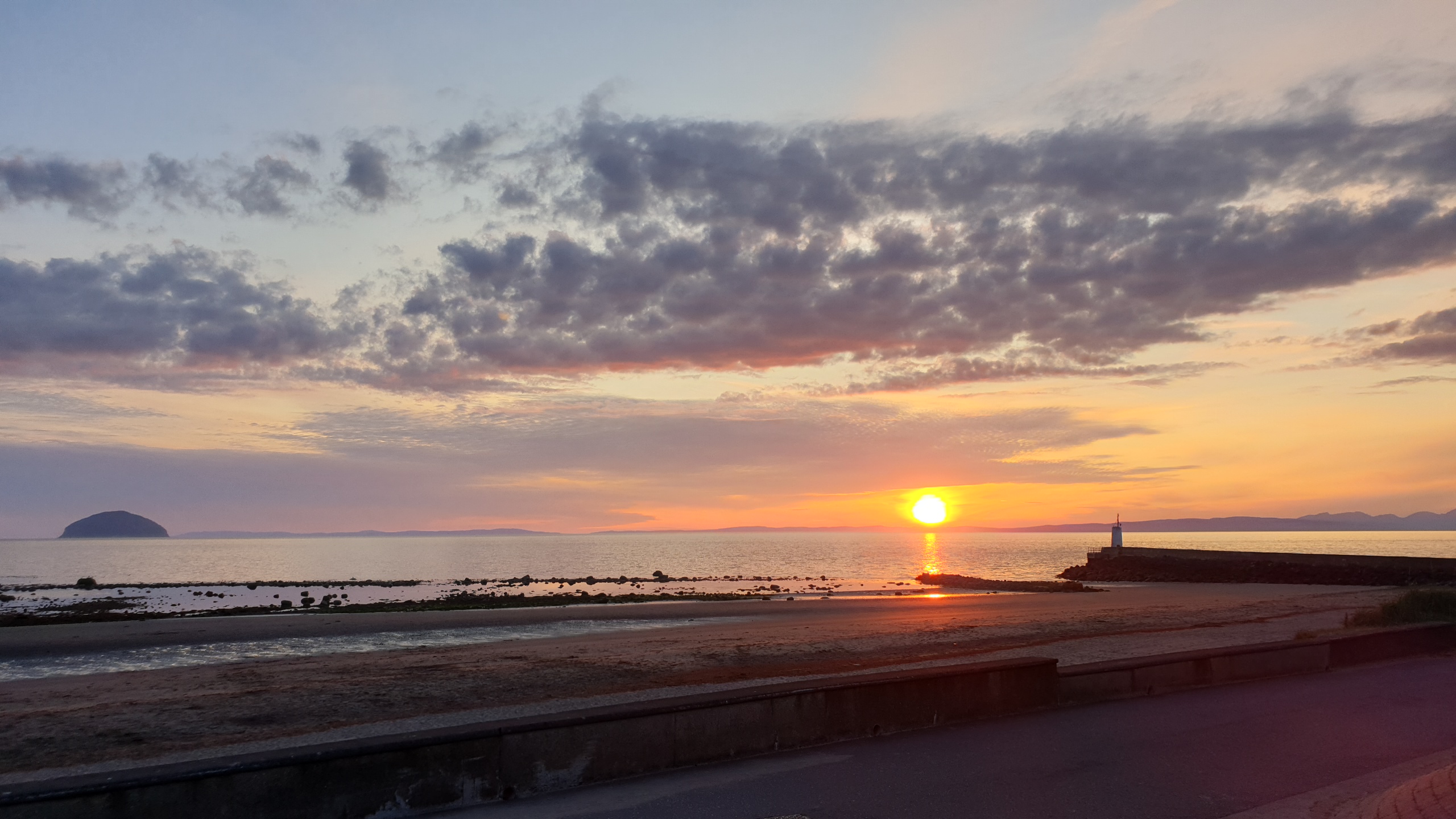 2019 – Escape to Girvan does not quite have the same ring to it as, say, Escape to Victory, but I did escape in Bessie for a few days and I did end up in Girvan so it’s the best title I can think of…

When The Navigator informed me that she had a few weeks work lined up in July I duly commiserated, but immediately started planning to escape away with Bessie for at least one of those weeks and Sunday the 7th was the big day.

But where to go? The contenders were, in no particular order,
The Moray coast (again) – A lot of places still to explore.

The Fife coast and places like, Burntisland and the pretty fishing villages of St Monans, Pittenweem, Anstruther and Crail.

And the winner was…(imaginary drum role) – The Ayrshire coast and in particular, Girvan.

Back in the day, Girvan was a thriving holiday destination but like so many towns nowadays it is more a day trip destination than somewhere you would go for a week or a fortnight as your parents or grandparents might have done. That, said it still has enough to keep the day trippers happy with a great beach and an abundance of ice cream shops and chippies! The main street has seen better days with a few empty shops and the usual mix of bargain and charity shops!

The harbour seems to be thriving with a boat repair yard and a marina catering for visiting yachts but it was small fishing boats coming in to land their catches that seemed to be making the most of the facilities.

Girvan is only and hour and a half south of Glasgow so I was here in less than four hours from Argyll, although I did make a pitstop in Glasgow to top up on diesel as Asda Govan where it was £1.25 a litre, a considerable saving over Lochgilphead’s £1.32.

It was a beautiful day when I arrived in the late afternoon and the place was packed with people making the most of the glorious weather. Those of you who know this coast will realise that there are are some nearer, and dare I say better resorts I could have gone to with Largs, Troon, and Ayr some of the nicer ones but Girvan has one huge advantage over them if you have a motorhome and that is free parking right at the beach/harbour looking out to sea.

On a clear day like today, the Northern Irish coast can be seen, as can the Kintyre Peninsula and the Isle of Arran but the stand out feature out to sea is Ailsa Craig, a towering lump of granite 10 miles off the coast. The island was put on the market a few years ago and this article appeared in the Guardian newspaper.

Ailsa Craig, a volcanic island immortalised in the memory of a million childhood holidays, climbs out of the Firth of Clyde 10 miles off the Ayrshire coast. For the last two years, its future has been uncertain since it was put up for sale for £2.5m by the Marquess of Ailsa.
The island is home to Europe’s biggest gannet colony and an increasingly significant number of puffins. Its blue hone granite is considered ideal for the manufacture of curling stones, two-thirds of which are made from it.

It had been thought that the island would be snapped up. Any new buyer would also have been getting a ruined 16th-century castle, built to prevent the Spaniards grabbing the island, a lighthouse and four cottages for lighthouse men as part of the deal. More important, they would also be securing a rare opportunity to own one of Scotland’s most recognisable jewels.

The asking price was reduced to £1.5m and it is believed to have been bought by the Royal Society for the Protection of Birds.

On arrival I could not get parked on the front row of vans overlooking the beach but as the daytrippers in cars started to drift away I managed to get a spot later on, just in time to capture the sunset dipping between Ailsa Craig and Arran.

I had a wander down the pier to talk to a couple of people fishing and they reassured me it was a good spot to catch fish, although I should have read more into the fact they were not catching anything!

So, the omens were good – the weather was warm and the fishing looked to be promising – what could possibly go wrong?

Monday could not have been more different – grey clouds, rain showers and not nearly as warm as yesterday. After lunch, and with a break in the showers I had a walk up into the town via the harbour and marina.

You can never have enough fishing tackle and I frequented the really well stocked tackle shop, The Ultimate Angler, where the owner confirmed how good the fishing could be from the pier.

The tide was due to come in at 4.30pm and I bagged my spot at just after three and was joined by an experienced local who rhymed off all the species that could be caught here, the most common being pollock.

It was cold and miserable and neither of us caught anything!

Ever the optimist, I thought my luck would improve tomorrow but this next picture summed up Tuesday!

Luckily the Tour de France had started and it is shaping up to be one of the most exciting in years so ITV4 has start to finish coverage of each stage so I watched every inch of today’s stage, all four hours of it…

I also started a book I treated myself to last week and I’ll give it a plug as not a lot else was happening today!

As a boy rep I always listened to the Test cricket on the radio, as much for the humour of the commentators as the sport itself and I remember having to pull over with tears streaming down my cheeks when in 1976, ‘Johnners’ said the immortal… “The bowler’s Holding, the batsman’s Willey.”  He never actually said it in the live commentary and it was only when someone wrote in claiming he had said it that it was discussed on air, and the rest is history.

Very few commentators in any sport have come close to emulating the knowledge, passion and humour of Jonners, Blowers and the rest of the Test Match Special team, until I discovered in recent years a cycling commentator called Carlton Kirby who anchors the main cycling events on Eurosport. Carlton can talk for hours on any subject under the sun if nothing much is happening on some of the longer stages and is very funny so I bought his new book and if you like cycling and want a flavour of what goes on behind the scenes as the races go round Italy, Spain and France then this is a good read.

Click HERE or on the image to buy from Amazon.

It would be remiss of me not to mention that links to my own two Kindle books, including one on how to take your motorhome to see the Tour de France, can be found if you click on this PAGE

The rain was not so persistent on Wednesday and the tractor was back out cleaning the beach again.

At lunchtime a couple parked next to me in their car to enjoy a fish supper and when the man went to put the wrappers in the bin the seagulls dive bombed him in a scene reminiscent of Hitchcock’s The Birds.

With high tide due at 7pm I was on the pier at six and for two hours was there on my own and again caught nothing, not even a nibble so bought a Chinese takeaway as compensation!

The only thing of note was the arrival of a boat carrying a cargo of logs destined for one of the mills nearby.

Just after I got back to the van with my Chinese the heavens opened up again and the noise on the roof was something else, but as an experienced Scottish motorhomer you get used to it but what you never get used to is someone in a caravan putting on the noisiest generator on the planet and not putting if off until after 11pm. I’m not a fan of generators at the best of times but neither am I a fan of caravans wildcamping as they were not capturing their waste water from the shower/sink and it was running all over the car park!

Once the generator was switched off I settled down to sleep until all hell broke loose at exactly 5am!

First, a load of lorries turned up and the boat unloaded the logs onto them in the noisiest way it could.

Then a load of busses arrived and disgorged their passengers who noisily queued at the nearby public toilets. Then a smaller bus turned up and parked two along from me and their passengers got out for a fag break and started practising their sectarian songs at full belt. At 5.30am!!

Then, once they all departed for Cairnryan and the ferry to ‘Norn’ Ireland and the 12th of July parades, the next thing was a Greggs bakery lorry arrived on the car park behind all the motorhomes for a break, keeping his lorry engine running as well as an incredibly noisy refrigeration unit above his cab for half an hour.

That was it. I had had enough. I was never going to get back to sleep and the rain was lashing down again so I quickly got dressed and was on the road north before 6am!

It continued raining past Ayr and Kilmarnock so I cut off towards East Kilbride as the sky looked clearer to the east. I kept driving east and ended up in Stirling where it was bright and sunny. I had a doze in the afternoon and bought some shopping to take home then headed for Buchlyvie where I had an undisturbed night’s sleep.

On Friday morning I headed to Balloch and joined the A83 and home to Ardrishaig. It was an eventful week and The Navigator had to buy her Friday fish from the boys in Tarbert again rather than my efforts…

COMING UP…
We are heading off at the end of July to pick up Aunty Emma in Leeds and head for Staffordshire where we will be babysitting Eilidh for a night while Jill & Simon attend a wedding.

After that we’ll be meeting Alan & Helen of El Campello fame for a couple of nights with them before we head over to Bessie’s second home at Gunthorpe for Lowdhams to finish off the last (hopefully) of the warranty work and this will take three days! We will have a week to dodge up the road before The Navigator has to work again…