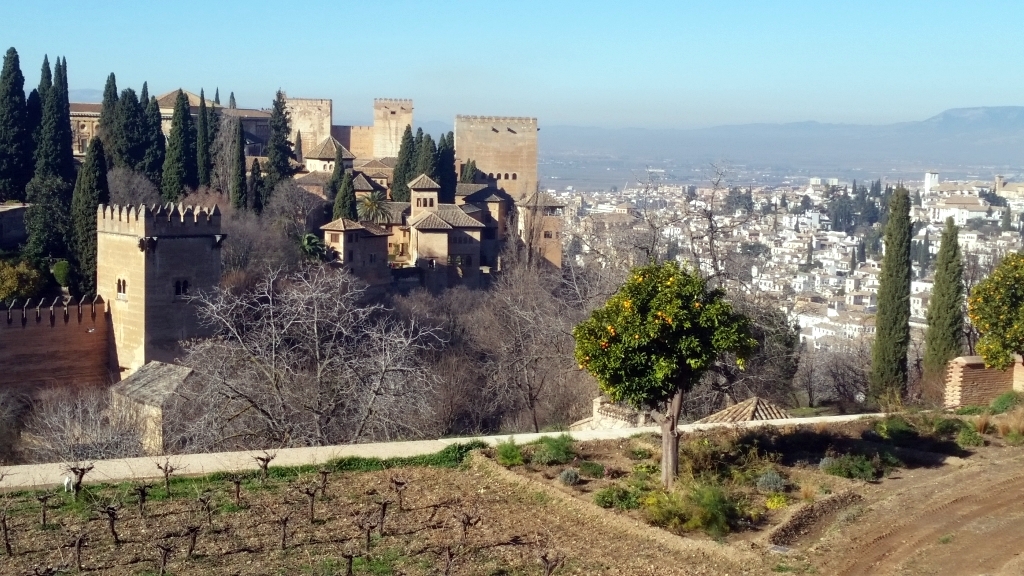 How do you begin to describe The Alhambra Palace complex? I won’t list all the adjectives that spring to mind, suffice to say that if I did list them, there would be a fair few. The Alhambra is a UNESCO World Heritage Site and is now one of Spain’s major tourist attractions, exhibiting the country’s most significant and well-known Islamic architecture, together with 16th-century, and later Christian building and garden innovations.

“The Alhambra is a palace and fortress complex located in Granada, Andalusia, Spain. It was originally constructed as a small fortress in AD 889 on the remains of Roman fortifications, and then largely ignored until its ruins were renovated and rebuilt in the mid-13th century by the Nasrid emir Mohammed ben Al-Ahmar of the Emirate of Granada, who built its current palace and walls. It was converted into a royal palace in 1333 by Yusuf I, Sultan of Granada. After the conclusion of the Christian Reconquista in 1492, the site became the Royal Court of Ferdinand and Isabella (where Christopher Columbus received royal endorsement for his expedition), and the palaces were partially altered in the Renaissance style. In 1526 Charles I & V commissioned a new Renaissance palace better befitting the Holy Roman Emperor in the revolutionary Mannerist style influenced by Humanist philosophy in direct juxtaposition with the Nasrid Andalusian architecture, but it was ultimately never completed due to Morisco rebellions in Granada.”

When we had arrived at the campsite the guy there offered to buy our entrance tickets to The Alhambra for us but said we needed to transfer money from our bank account which would incur fees etc etc. Now a lifetime in Sales has taught me one thing, if nothing else – ‘you can’t kid a kidder’ and I declined his kind offer and within the hour after setting up I had purchased 2 tickets online using my credit card with no issues and no fees.

There are different entry charges depending on how much or little you want to see. We chose the €14 tickets which gave entry to the Nasrid Palace and an area known as Generalife. As I bought the tickets online the day before they were e mailed to me as a PDF attachment which you have to show to gain the initial entry and then at various entry points to buildings throughout the complex, which is all well and good, but limiting if you use your phone as a camera (as I do) as, if the battery runs down taking pics and you can’t show the PDF then there is no entry!

The Palacio Generalife was the summer palace and country estate of the Nasrid rulers of the Emirate of Granada in Al-Andalus, now Andalusia. Generalife is a series of gardens with some assorted buildings scattered throughout it. Most of the gardens either have a fountain or running water passing through them in little culverts which, in the height of a blistering hot summers day must have had a cooling effect.

Nowadays with modern pumps it is easy to see how they get this much water to flow about the complex, but back in the day, hundreds of years ago, it would have been a great engineering feat to have achieved this on such a high hill. As well as the water features, the buildings in Generalife contained some wonderful detail and in the following picture you can see it in the upper part of the arches. This practice of only decorating the upper part of door arches is repeated throughout the entire complex.

THE NASRID PALACE
This is the main attraction of the whole complex and is worth every cent of the entry fee in its own right. We really only get to see the negative side of Islam on our TV screens all too often but here the architecture and Islamic decoration here is exceptional.

“Completed towards the end of Muslim rule of Spain by Yusuf I (1333–1353) and Muhammed V, Sultan of Granada (1353–1391), the Alhambra is a reflection of the culture of the last centuries of the Moorish rule of Al Andalus, reduced to the Nasrid Emirate of Granada. It is a place where artists and intellectuals had taken refuge as the Reconquista by Spanish Christians won victories over Al Andalus. The Alhambra integrates natural site qualities with constructed structures and gardens, and is a testament to Moorish culture in Spain and the skills of Muslim, Jewish, and Christian artisans, craftsmen, and builders of their era.”

When you purchase your tickets you are offered different entry times (if you are lucky) to the Nasrid and I chose 2.30. You can wander about the whole complex all day but you have to enter the Palace at your given time, or within half an hour, or you don’t get entry at all. This is to control the flow of visitors throughout the day and they impose a whole long list of conditions you have to abide to, like backpacks to be worn on your front, not back, no eating or drinking inside the buildings, etc, all fairly reasonable demands but the one that was completely flouted, without apparent challenge was the use of selfie sticks which you are not meant to use at all. We went round the tour in the company of a bus load of Japanese and every one had their phones on selfie sticks and welded to their hands. I’m not sure if the Alhambra staff had just given up over the years trying to get them not to use the sticks but they were in use constantly. I digress slightly here but there were two other traits that caught my eye about the Japanese, the first being the use of the raised inverted v sign with both hands beside their face when they were getting their pictures taken and the other thing I found odd was the use by some of them of surgical face masks in what was the cleanest, freshest, crispest air you could possibly breath on a high European hill in January, it wasn’t downtown Tokyo in a smoggy summer heatwave! Odd people.

“Despite long neglect, willful vandalism, and some ill-judged restoration, the Alhambra endures as an atypical example of Muslim art in its final European stages. The majority of the palace buildings are quadrangular in plan, with all the rooms opening on to a central court, and the whole reached its present size simply by the gradual addition of new quadrangles, designed on the same principle, though varying in dimensions, and connected with each other by smaller rooms and passages. Alhambra was extended by the different Muslim rulers who lived in the complex. However, each new section that was added followed the consistent theme of “paradise on earth”. Column arcades, fountains with running water, and reflecting pools were used to add to the aesthetic and functional complexity. In every case, the exterior was left plain and austere. Sun and wind were freely admitted. Blue, red, and a golden yellow, all somewhat faded through lapse of time and exposure, are the colors chiefly employed.”

The decoration consists for the upper part of the walls, as a rule, of Arabic inscriptions—mostly poems by Ibn Zamrak and others praising the palace – that are manipulated into geometrical patterns set onto an arabesque setting (“Ataurique”). Much of this ornament is carved stucco (plaster) rather than stone.

In the centre of the court is the Fountain of the Lions, an alabaster basin supported by the figures of twelve lions in white marble, not designed with sculptural accuracy but as symbols of strength, power, and sovereignty. Each hour one lion would produce water from its mouth.

After the Christian conquest of the city in 1492, the conquerors began to alter the Alhambra. The open work was filled up with whitewash, the painting and gilding effaced, and the furniture soiled, torn, or removed. Charles I (1516–1556) rebuilt portions in the Renaissance style of the period and destroyed the greater part of the winter palace to make room for a Renaissance-style structure which was never completed.

The final building on our tour was one building too far for The Navigator as it was a tower with spectacular views over Granada and the surrounding landscape.

Not the best with heights at the best of times, she sat this one our while I climbed to the top to take in the panorama, partially spoiled by the dipping sun as the best views were looking in the direction of the sun, never great for taking pictures.

And that was it. A full day of history, culture, art, monuments, gardens and views, which it was a privilege to see on such a lovely day. A taxi back into Granada and a bus back to the campsite rounded off the day before we had a seat in front of the van taking in the last of the sun before dinner and resting our weary feet, and a day to look forward to in the city of Granada tomorrow.

You can find out more about the Alhambra Palace and buy tickets HERE.
See our other blog posts HERE.