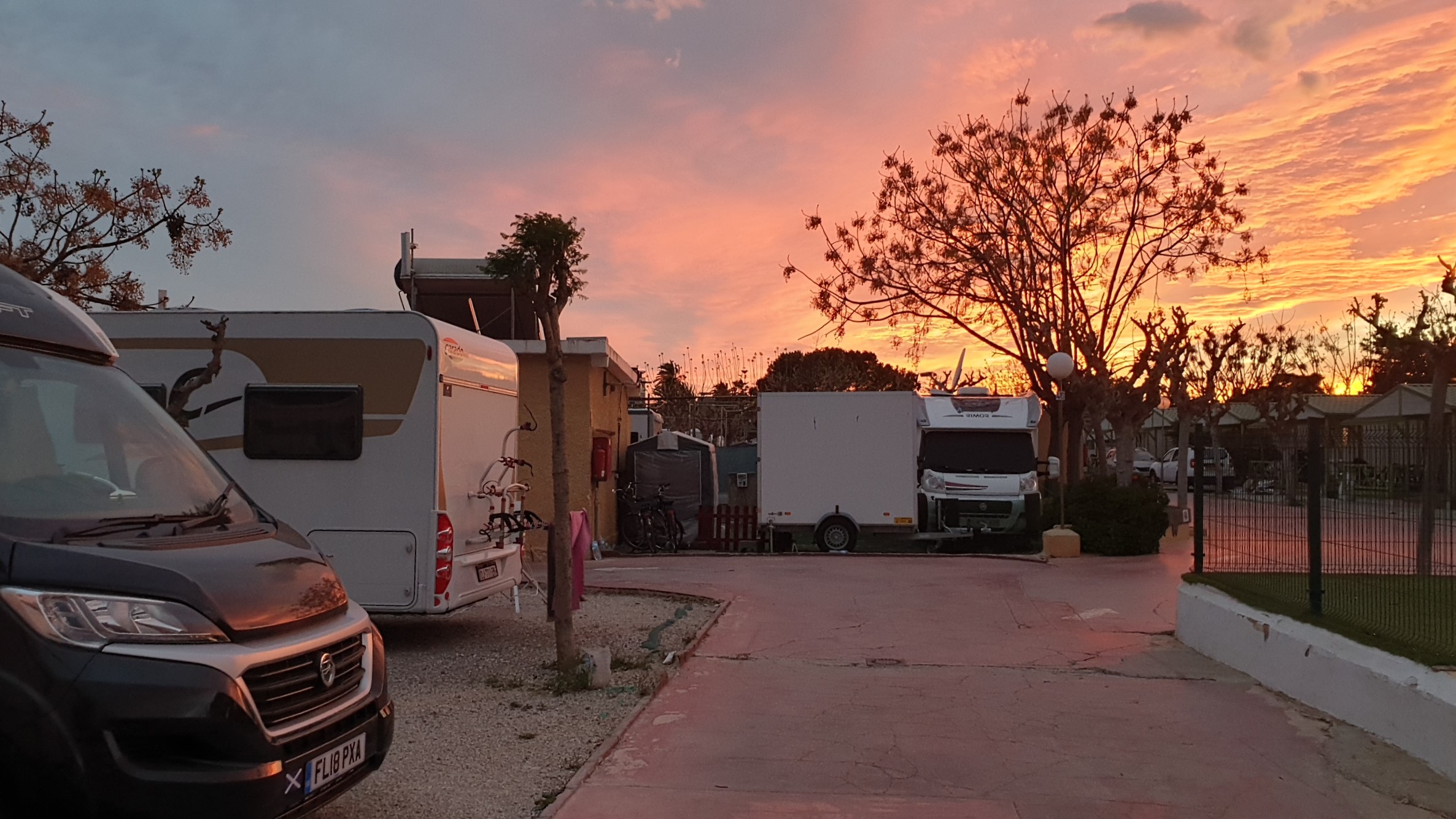 2020 – It was all going so well, and then…
In my first BLOG of this trip I described how we had driven from Argyll to the Costa Blanca without any problems and had settled into our three months at Camping le Jardin at El Campello.

The second BLOG in the series was all about our first month on site and enjoying the sunshine and the company of our fellow Brits.

This blog post describes some of the events in February and early March before it all went pear shaped, not just for us, but for all holidaymakers, be they in motorhomes, caravans, hotels etc, but more of that later…

At this point it may be advisable to put the kettle on and make a cuppa as this is quite a long post as it was quite an eventful few weeks!

A typical day in February does not start until 10am as it is not properly light until then. After breakfast most people wash dishes, clothes, their vans or cycle to Mercadona, take their dog for a walk and do any odd jobs that need attention as it is not until about 11.30am that there is enough heat to sit outside and relax.

The rest of the typical day is spent outside until about 4pm when the sun begins to dip and it gets to be too chilly to sit out.

If we’re having a barbecue it tends to be about 3ish so that it can be finished and the dishes done before retiring for the evening.

Our pitch at Camping El Jardin is near the entrance to the site and about 75% of people have to pass us as they enter/leave the site and it breaks the day to have a chat with some of them as they go past.

We tend to do a “big shop” at Mercadona on a Friday and walk round to the local market on a Sunday morning. Friday night is drinks night and initially we all went to the bar on site, but, it’s Bingo night there on a Friday and the combination of some excitable, noisy foreigners and flat beer one night made us venture back to the Hexigon Bar, further away, but even cheaper, better drinks!

Those are the only a few instances of what might be considered a routine, leaving plenty of days free for other things.

The “other things” might include going out for lunch with some of our fellow Brits on site, especially if a birthday has to be celebrated. Occasionally we will go for a cycle and destinations might include going right to the end of the beach, or into El Campello on a Wednesday to visit the market then have lunch at 100 Montaditos on the beach front with a stop at Lidl on the way back.

The train/tramline that runs between Alicante and Benidorm (and further) is only a 15 minute walk away, so days out to those places, or any others on the way, like Villajoyosa is easily done.

We ventured up to Benidorm to meet John and Margaret, our next door neighbours back home and met at their hotel and went out for a mid-morning cuppa with them. It was a bit foggy for most of the day, but it was a good day out anyway.

Later that same week we were able to enjoy our Christmas present from our family, a Gastro Walking Tour of Alicante, where, in the company of a few others we were escorted around the streets of Alicante to places and buildings we had never been to before and samples of Spanish food as well along the way. Maybe not Gastro, but a really good experience.

As well as the food stops we also visited the Cathedral and a few Museums, including one where they displayed the very intricate paper mache sculptures that are used in an annual procession and usually burned at the end of it.

We had celebrated Carol’s birthday in January and there were no other birthdays for a few weeks, so it was decided that we should go to the Colonial Buffet on the outskirts of Alicante, which was mostly Chinese but had a great selection of fish which suited The Navigator but I am more of a carnivore so I enjoyed a very decent entrecote steak, along with…..

When we were online checking out buffet restaurants online to try it was Garry who picked The Colonial and I had noticed another one in the centre of Alicante which we tried the following week. It was much smaller and had mostly Spanish dishes, but very acceptable nonetheless, and great value again.

We took the tram into Alicante but decided to take the bus back and on our way to the bus stop we stopped for a liquid refreshment, as you do, and when sitting enjoying the late afternoon sunshine we spotted someone with brown paper Primark bags.

That might have been a flimsy excuse, but that led to the four of us going on another tram/bus adventure for a raid on an out of town Primark, and a 100 Montaditos lunch the next week.

Also with Carol and Garry we ventured out one Saturday evening into Alicante as there was a festival on the Ramblas and after taking in the chaotic scenes we finished the evening with a Chinese meal, as you do when you’re in Spain.

The evening ended on a bit of a downer for Garry as he was charged the princely sum of €12 for a (large) glass of dark rum and coke at the bar when we got off the tram back in El Campello. Given that his 3 course Chinese meal was only €9 including a drink, it was a surprise to say the least!

The next social outing was to another Buffet, The Wok, a few tram stops in the direction of Alicante to celebrate the birthday of Linda and it was another enjoyable day out.

One of the features of The Wok is their selection of fish and seafood which you put on a plate and take it to be cooked, although this year they had a sign up saying there was a two plate maximum for any one person!

So up to now we were having a great time, but then…
Usually when we are travelling I write up our events on a daily basis when that days activities are fresh in my mind, but this year I didn’t do that as on so many days, nothing much of any note happened, only relaxing in the sunshine! Then, two fairly disastrous things happened in late February that disheartened me…

First. This site was hacked and all the content from the last five years was completely wiped. Initially I thought the site could be recovered as my hosting company back up the site daily and keep copies on a rolling thirty day basis, but it soon became apparent that these backup files had been deleted as well.

Second. Within a week of the Blog being deleted my laptop would not fire up properly and the screen was white and not showing the login screen. I searched online via a tablet to find a solution, but nothing worked so I took it to Beep, a local computer repair shop. They diagnosed that it was the screen that had packed up for some reason, and that, as it was a touch screen, it would be about €400 to fix!

So, within a week I had lost my Blog and laptop! Fortunately the laptop itself was still working and by using an HDMI cable connected to the TV I could still use it temporarily, however it was not practicable to do so in the confines of the motorhome. I would have to buy a new laptop on my return, which was not going to be for more than a month, or so I thought!

And that, dear blog followers, is how I come to be writing this particular blog post retrospectively on the 8th of April.

Now, back to mid February (ish).

It seemed like it was getting warmer by the day and it was getting lighter for longer each day. There was the odd grey, overcast day but the upside to that was it was still twenty odd degrees warmer than back home.

The social side of life was really good, both on and off site and we enjoyed many lunches, barbecues and drinks in the company of our friends on site.

A few of them started to either move on to other parts of Spain, or return directly home as some had been here since October.

Around this time the word Coronavirus started to be a topic of conversation, but when you are enjoying yourself in a bit of an enclosed bubble, nothing you read about a flu like disease in China is going to spoil your holiday. Little did we know!

As the news of the virus spreading to Europe, especially Italy and Spain, became slightly more concerning, we still thought there was nothing much to worry about, after all most of the cases in Spain were in Madrid and the northern Basque region, hundreds of miles away.

And then, in one crazy week all of that changed. Our family were booked to fly out to join us on Saturday the 14th of March and it was in the week leading up to that date that events overtook us. To try and halt the spread of the virus, Spain went into lockdown with the police patrolling the streets to enforce it.

On the Friday evening I advised them not to travel as, even if they had made it here, no-one could now leave the campsite except to go to the supermarket or a chemist. As it happened Jet2.com cancelled all flights to Spain early on the Saturday morning meaning they would refund the cost of the tickets. A huge disappointment for us all, but there was no option but to cancel.

We had gone round to Mercadona to stock up for the family coming and we were greeted with empty shelves for the first time as the Spanish started stocking up for the lockdown. That said, although not back to normal, Mercadona had most essentials back in stock the following week.

A number of people of all nationalities started to leave for home but at this point we decided to stay as there was no immediate threat to us. I did contact Brittany Ferries and they brought our return crossing forward from the 5th of April to the 29th of March, still two weeks away, but the earliest available crossing from Santander to Portsmouth.

And then, within days the situation escalated in Spain and all foreign nationals were advised to leave the country and it was a possibility that Spain and France might close their border. Then two things happened almost simultaneously that forced our hand. The Spanish Government announced that hotels and campsites had to close and on top of that Brittany Ferries cancelled our rearranged crossing on the 29th.

We packed up the van on the 18th and left the site on the 19th heading for Calais and you can read about our journey home in the next blog HERE.