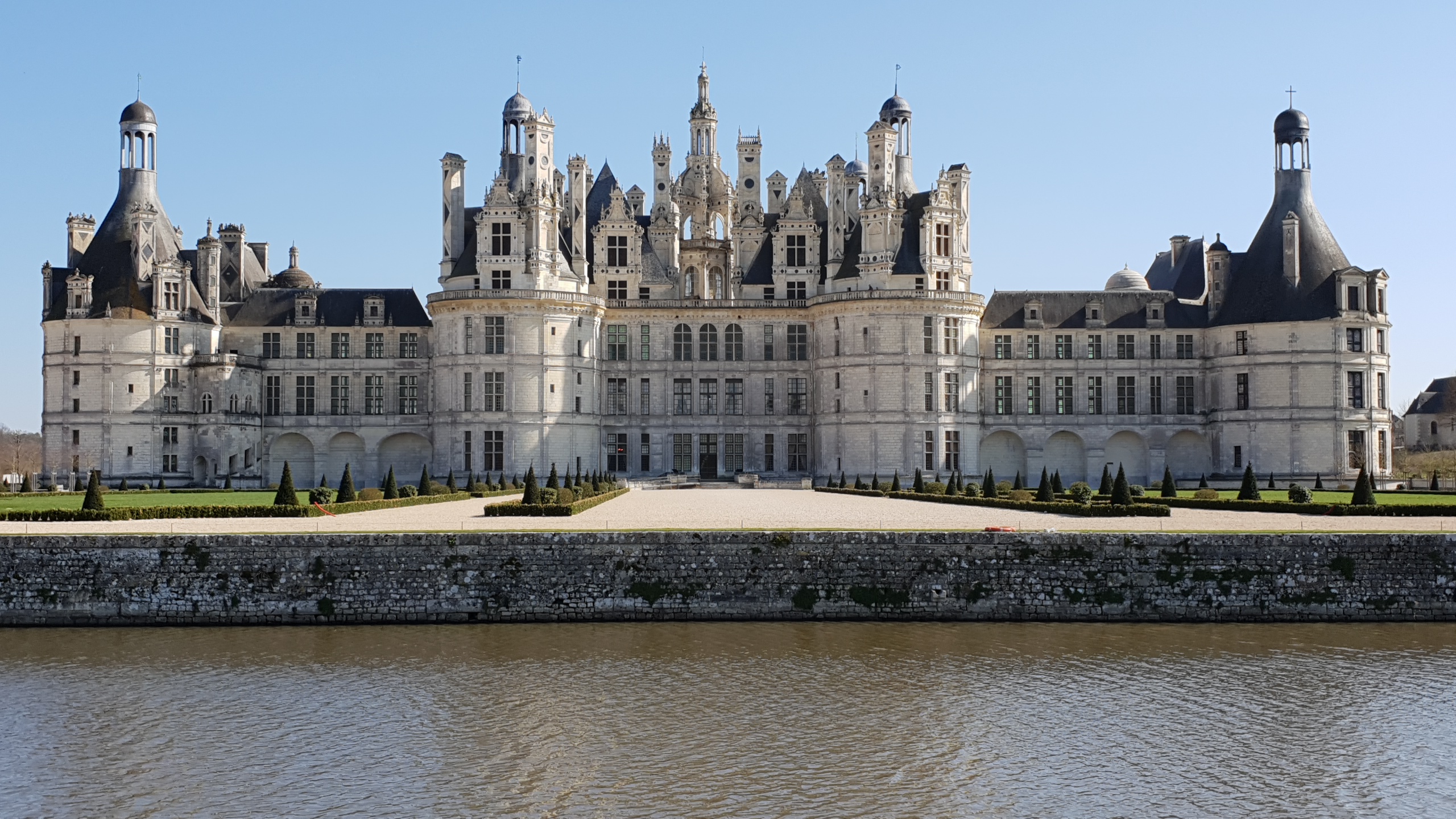 Chambord was built between 1519 and 1547 by King Francis I of France, not as his residence, but as a hunting lodge. According to Wikipedia, Château de Chambord is one of the most recognisable châteaux in the world because of its very distinctive French Renaissance architecture which blends traditional French medieval forms with classical Renaissance structures.

Chambord is the largest château in the Loire Valley, it was built to serve as a hunting lodge for Francis I, who maintained his royal residences at the Château de Blois and Amboise. The original design of the Château de Chambord is attributed, though with some doubt, to Domenico da Cortona, but drawings by Leonardo da Vinci may also have inspired the builders. Chambord was altered considerably during the twenty-eight years of its construction

With the château nearing completion, Francis showed off his enormous symbol of wealth and power by hosting his old archrival, Emperor Charles V, at Chambord. It is not only an affirmation of royal power, but also an evocation of the ideal monument, it remains an enigma that has yet to divulge all its secrets. Chambord is perhaps the equivalent in architecture to the Mona Lisa in painting.

In 1792, in the wake of the French Revolution, and, as at Versailles, some of the furnishings were sold and timber removed. For a time the building was left abandoned, though in the 19th century some attempts were made at restoration. During the Second World War, art works from the collections of the Louvre and the Château de Compiègne were moved to the Château de Chambord. The château is now open to the public, receiving over 700,000 visitors a year.

One of the architectural highlights is the spectacular open double-spiral staircase that is the centrepiece of the château. The two spirals ascend the three floors without ever meeting, illuminated from above by a sort of light house at the highest point of the château. There are suggestions that Leonardo da Vinci may have designed the staircase, but this has not been confirmed. If you saw the BBC2 series ‘Versailles’ there was a scene in one episode with people running up and down the intertwined stairs without ever meeting and The Navigator thinks it may have been filmed here.

When Francis I commissioned the construction of Chambord, he wanted it to look like the skyline of Constantinople. The roofscape of Chambord contrasts with the masses of its masonry and has often been compared with the skyline of a town, it shows eleven kinds of towers and three types of chimneys, without symmetry, framed at the corners by the massive towers.

There is a walkway around the roof and the views from there are exceptional. The following pictures Show the formal gardens at the front of the building looking towards the forest…

And these pictures are looking to the rear of the building…

The château is surrounded by a 52.5-square-kilometre (13,000 acres) wooded park and game reserve maintained with red deer and wild boar, enclosed by a 31-kilometre (19 mile) wall. The river Cosson runs through the estate and is canalized on one side to form a wide moat.

The château was built to act as a hunting lodge for King Francis I, however, the king spent barely seven weeks there in total, and that time consisted of short hunting visits. As the château had been constructed with the purpose of short stays, it was not practical to live in on a longer-term basis. The massive rooms, open windows and high ceilings meant heating was impractical and even today you are advised to wrap up before entering the building as it is chilly inside.

Similarly, as the château was not surrounded by a village or estate, there was no immediate source of food other than game. This meant that all the provisions had to be brought with the group, typically numbering up to 2,000 people at a time.

As a result of all the above, the château was completely unfurnished during this period. All furniture, wall coverings, eating implements and so forth were brought specifically for each hunting trip, a major logistical exercise. It is for this reason that much of the furniture from the era was built to be disassembled to facilitate transportation and is where the modern French word for furniture, meubles, comes from and we get the word mobile. Not a lot of people know that, and we didn’t either until we saw the audio visual film at the start of the tour!

After Francis died of a heart attack in 1547, the château was not used for almost a century, and only sporadically afterwards.

Other random pictures of Chambord…

It would be like comparing apples with oranges to compare Chambord with Versailles and although Chambord was built on a massive scale, it was only ever meant to be an occasional hunting lodge for King Francis I, where Versailles was the full time residence of the Sun King himself, Louis XIV.

Chambord is so easy to visit with a motorhome, and the Aire, €11 a night, is very close to the building. We visited the building in the morning, went back to the van for lunch, then had a walk around the grounds in the afternoon. There is a huge network of paths throughout the massive grounds and forest, perfect for cycling.

All in all, a great place to visit if travelling down through France, or up the Loire valley.