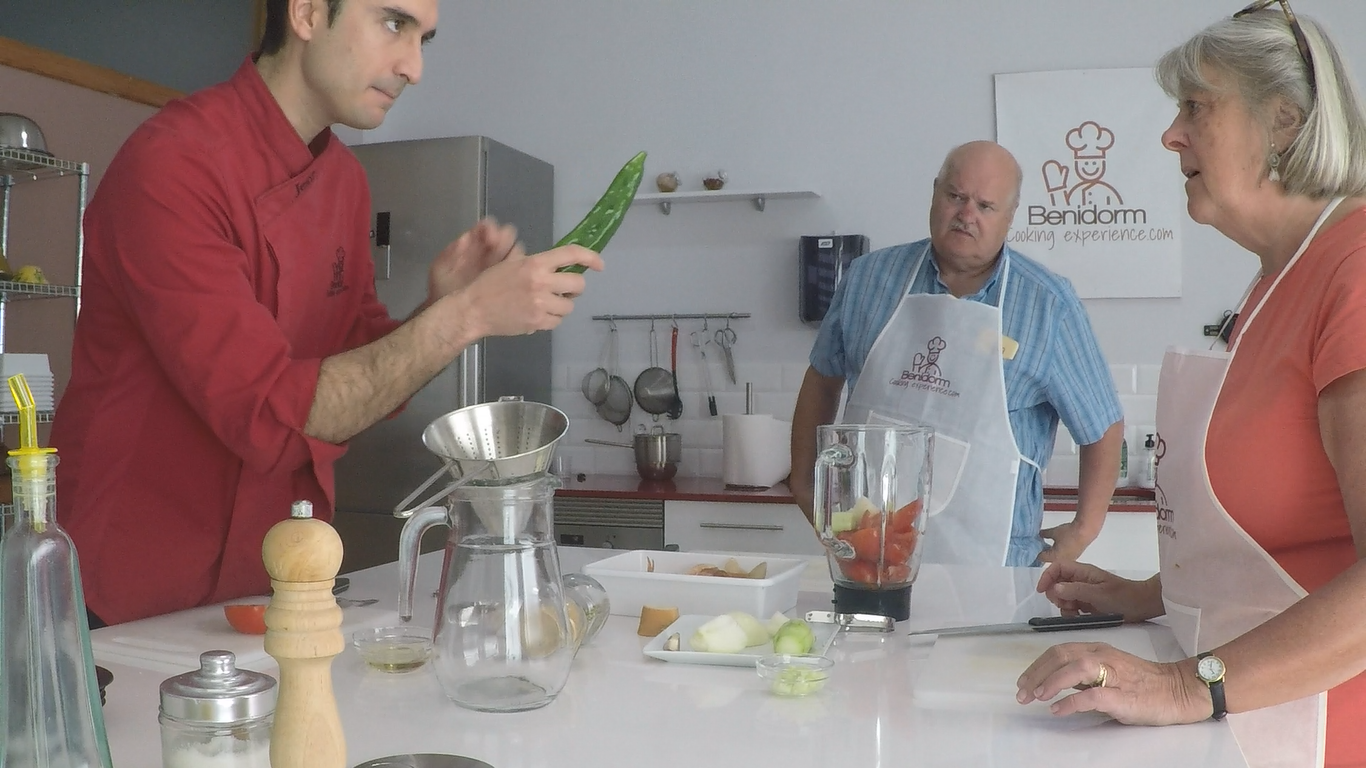 2019 – The Benidorm Cooking Experience
No doubt you will all be delighted to know that we are enjoying the warm weather in Spain since we arrived in mid January 2019. The journey here was fantastic as we took two weeks to drive down through France on a route we have not been on before. We managed to take in two of Europe’s great attractions, The Palace of Versailles near Paris, and Carcassonne, the fortified city in the department of Aude, in the region of Occitanie and there will be separate blogs on both of those visits and you can read them on the following links.
You will travel in a land of marvels – The Palace of Versailles (coming soon)
You will travel in a land of marvels – Carcassonne

This post is a bit different from the normal travel / places posts and as you will have seen from the title, we have had a cookery experience, not from John and Greg, but from Jesus (He-sus) and a great time was had by us both.

Benidorm is maybe not the first place you would think of in Spain to have a top-notch cookery lesson but there is far more to be experienced here than the cheap and cheerful fry-ups and fish & chips that Brits are renowned for consuming in Benidorm.

When we told our family we were heading off for three months to France and Spain with two months in El Campello, we never expected to be on a Spanish cookery course in Benidorm, but we have Santa Claus to thank, as well as our daughters, for arranging it for us as a Christmas present. At the time it seemed so far away, after all we (I) had to drive just over 1,700 miles to get here and experience Versailles, Carcassonne and many other places on the way to the Costa Brava.

The course was booked for Wednesday the 20th of February starting at 10am so we took the tram into El Campello then transferred onto the train for the 45 minute journey up the coast to Benidorm on the Tuesday as I had found a good cheap hotel in the old town of Benidorm for the night via Booking.com (The Marbella – €32 B&B).

When we got to Benidorm we first had our lunch then found our hotel and checked in and left our bags and headed out for a walk. We were in Benidorm last January and it seemed much busier this time with the influx of Celtic supporters marking time before heading on to nearby Valencia to see their team lose. They did add some colour and noise to the day!

It was a really warm day and although you can’t see it from the above pictures, there were many people on the beach. At night we treated ourselves to a Chinese meal which we thoroughly enjoyed and had an early night in preparation for a busy day ahead. After a decent little continental breakfast we headed off to the market to meet Jesus at 10am. The format of the day was – to buy the ingredients for our lunch at the market then take it back to his premises and use them to cook our lunch which was to be.
Andalusian Gazpacho
Chorizo in Asturian Cider
Tortilla Espanola (Spanish Omelette)
Seafood Paella
Grandma’s Chocolate Cake

At some point in the future there will be video to show you the complete process, from sourcing the ingredients, cooking the dishes, then the best part – eating them. I made a slight booboo when I set the GoPro up as I thought I had set it to film a time lapse video which would had condensed everything into about five minutes, but ‘the best laid plans’ didn’t work out and it recorded the whole process in normal time so it will take a fair bit of editing and that will have to wait till I get home as the weather is far too good to sit in the van for hours on end. As an aside, we have not had a single (daytime) drop of rain since we arrived in Spain eight weeks ago and even the nightime rain was only two hours!

Benidorm market is in the Old Town, and to be honest it is not that good compared with some of the others we have been to in Spain, with Valencia, Alicante and Cadiz our top three, so far. That said, the stalls that were there were more than adequate and we got everything we needed, apart from the fish and seafood which was bought from a nearby fish shop.

I learned a lot, as did The Navigator, and given she watches Masterchef and most other cookery programs, is a testament to Jesus that he taught her many new things. I will say at this stage that his English was perfect, having worked in Edinburgh for two years and Bristol for one.

After gathering all the ingredients it was back to the kitchen for a cup of tea and get our peenie (apron for the non Scots reading this) on (which we got to keep).

The first thing that we did was make the pudding as it needed time to set in the fridge while we made the rest of the dishes. I won’t describe in any great detail, the process of any of the dishes but if anyone wants the recipes we can forward them to you – or you can wait for the upcoming video. By the way the half empty bottle of brandy you see in the above picture is from the Jerez region of Spain and the missing half was not all used by us!

After the pud was in the fridge we set about preparing the other dishes and Jesus and The Navigator found it hilarious that I, the one person in the room allergic to peeled raw onions was the one delegated to prepare them!

Once the preparation was done it was then on to the cooking stage and the following pictures show the chorizo, Spanish omelette and paella being cooked. The gazpacho is of course served cold so it was not cooked as such, more assembled.

Then it was on to the star of the show, the paella and it was the Navigator who was in charge of this dish…

Once all the cooking was done, it was time to enjoy the fruits of our labours… We started with the Gazpacho Spanish Omelette and Chorizo in cider – a taste sensation!

Then it was the main course – the paella.

Followed by the chocolate pudding which was delicious as well…

And that was it, four great hours in the company of a lovely man who knows his onions, and every other ingredient inside out. Although it was a learning experience for us, Jesus made the whole thing fun and very enjoyable and we would thoroughly recommend his courses, to anyone on holiday in the Benidorm area, even as far away as Alicante as the train service is so good.

By the way, for the record, the nasty looking injury to my nose was NOT caused by domestic abuse, but too much sun and not enough suncream!

We were fortunate to have the undivided attention of Jesus as we were the only ones booked that day, but even if others were there, it would still be very worthwhile, you will learn lots and have a great meal too. As well as the attention Jesus gives you, the wine, cider, and all the ingredients are included – a bargain.

My video will be added to this page at a later date, but in the meantime you can see the official video here…