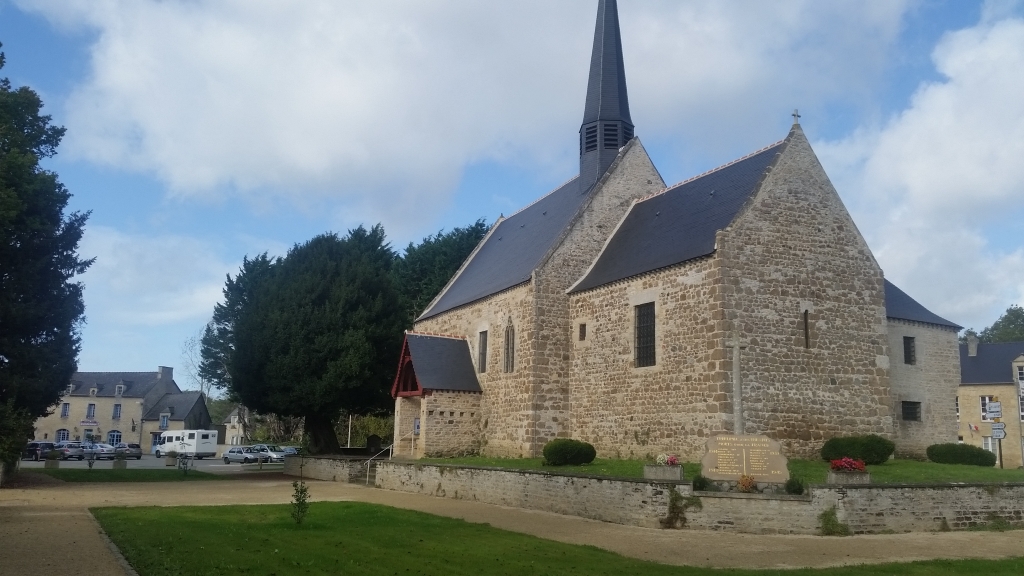 2018 – Trefumel and Memories Who remembers the classic 1975 hit ‘Memories’, sung by Gladys Knight and the Pips?

The second half of the song lyrics are very apt to the subject matter of this blog post – memories. Sing along if you remember how it goes…

Why does it always seem the past is better
We look back and think
The winters were warmer
The grass was greener
The skies were bluer
The smiles were brighter
Can it be that it was all so simple then
Or has time rewritten every line
And if we had the chance to do it all again
Tell me
Would we?
Could we?

Of all the wonderful places I have been to in my life, the tiny French village of Trefumel holds some outstanding memories and it has been a real pleasure to revisit it again down the years.

In 1974, myself, my parents and The Navigator, then my girlfriend, were on a holiday on Jersey. We used to go to Weymouth our holidays for a number of years, a Herculean drive in those days from Scotland as the roads were nothing like today’s standards. Sitting on Weymouth beach watching the ferry set off for Guernsey and Jersey gave my Dad the idea to visit the Channel Islands which we then did for a subsequent number of years, but 1974 was the really memorable visit.

One day we were returning to our Hotel from a walk around St Helier and noticed an ‘A’ frame board on the pavement outside the bus station advertising a day trip to France for the next day. When we enquired what the day consisted of we found out we would be picked up from our Hotel, taken to the airport, flown to Dinard Airport, picked up by a coach, taken to the lovely towns of Dinard and Dinan, on to a restaurant for lunch, then finishing up in St Malo for a few hours before being flown back to Jersey – all for £ 10 each. £ 10 was a lot of money back in 1974 but it would prove to be worth every penny. Dad had been in the Middle East during WW2 but never flown, and apart from his wartime service he, and my mother, had never been abroad on holiday.

At Jersey airport the bus load of expectant tourists were directed to the check in desk for Intra Airways to be confronted by their staff wearing ‘we flew Intra and lived’ T-shirts, hardly comforting to my very nervous mother! The aircraft was an ex WW2 Dakota and on entering at the rear you had to grab the headrests on either side of the passage to help pull yourself forward as the plane sat at an upwards angle, not level as aeroplanes are today.

As the engines fired up and the plane shook and rattled you could see oil streaks along the engine cowlings. After take off the pilot reassured everyone that as long as he got the plane to 5,000 feet, even if all the engines failed, he could glide the plane down safely!

We had a great morning visiting Dinard and Dinan before heading off inland to the little village of Trefumel, which, of course, no one had ever heard of.  We had been winding my parents up over what this ‘typical 5 course’ French lunch would consist of, with frogs legs and snails being unhelpful suggestions.

As it turned out it was a superb lunch with the main course being nothing more challenging than pork chop and frites. Back in those days wine drinking had not caught on in 1974 rural Scotland, but on this day in the heat of provincial Brittany, the unlimited wine was flowing and it was funny to see my Dad get very merry indeed. We returned on Intra and lived to tell the tale.

Sadly, my father passed away in 1980 and this experience was the only time he, and my mother, would ever fly or be abroad on holiday. That day therefore meant a lot to them but came too late in life for it to be repeated.

In the years following our 1975 marriage The Navigator and I had holidayed in Normandy and Brittany most years, towing our 12ft Sprite Alpine caravan the 500 miles from Falkirk to Plymouth before taking the Brittany Ferries sailing to Roscoff. It was on one of these holidays along the north coast of France in 1982 that we managed to find Trefumel, which was not so easy as these were the years without the benefit of Google Maps or Google Earth, but we somehow managed to find it and have lunch at La Vieille Auberge one again.

It was the type of place so frequently found in France where you find a complete mix of customers from lorry drivers to the local professional people who somehow find two hours out of their day to have a splendid lunch, washed down with at least half a litre of the house wine, if not a full bottle!

In 1985 Jill, our first daughter was born in the February and in the baking heat of July we rented a Gite not far from Mont St Michel and enjoyed our first ‘family’ holiday with the highlight being another visit to La Vieille Auberge. It’s a very typical French countryside establishment off the beaten tourist track where you chose your table and the Plat de Jour is brought to you without reference to a menu. You eat the dish of the day concocted from the freshest of local ingredients. Only once ever did this not go to plan in France, when, heading for a ferry home from Cherbourg, we stopped for our last lunch of the holiday at a roadside restaurant to be served pigs trotters as a starter!

In 2006 we were back again in the newly purchased Mazda MX 5 sports car for a long weekend via the Portsmouth to Cherbourg ferry. As well as visiting the incredibly impressive Mont St Michel again, we traced the steps of that day  back in 1974 through Dinard, Dinan and St Malo to end up having lunch at Trefumel again.

In planning our majot 2017 / 2018 European Road Trip we were not going to pass through the area without once again frequenting La Vieille Auberge, but the experience did not go quite as eagerly anticipated. After waking in Dinan earlier than normal, as we wanted a walk into the old town to visit the market, which we missed by 2 days, Thursday if you ever visit Dinan, we set off for the short drive south to Trefumel.

We arrived to immediately see changes to the road layout and the creation of a proper car park rather than the haphazard way cars used to be abandoned, rather than parked. There were some  cars already parked, and someone was going in with what appeared to be a musical instrument of some description and another man in a tux getting out of a car with some women who were dressed for a function. A funeral or wedding were our first thoughts, but as it turned out it was the 60th birthday lunch for the wife of the man in the tux.

On entering it was obvious we would not be enjoying our 5th lunch here as all the tables were set for a large group. About to cut our losses and leave, I thought I would get a few photos of the room so I though it was only polite to ask Francois (tux man) in very broken French for permission and he answered in perfect English. To cut a very long story short he was a school teacher and had brought an exchange school party from Brittany to Lenzie Acadamy for 15 years, knew Falkirk well, including visits to the Falkirk Wheel. Small world!

After a long chat with him and an English couple who were friends of the family, we made our excuses and left. This was going to be some birthday celebration as not only was it 50 people for lunch, but they were all staying for dinner and then 11 of them were returning for Sunday lunch!

So mon amis, that was Trefumel again, not quite as planned but still great to be there again and see the Auberge obviously thriving.

UPDATE
Since the above blog post went online in October 2017 we have been back to Trefumel again in July 2018 when we visited Brittany to follow the Tour de France for 5 stages. On the way to see the Tour in western Brittany we stopped off with Bessie at La Vielle Auberge for a lovely lunch on a beautiful sunny day.
As ever, The Navigator had a fish dish and I had a local hand-made sausage and both were delicious. We have changed a lot since those first photographs were taken, and so has the restaurant. It is more upmarket now and seems to be busier than ever as we were lucky to get a table that day.

Hopefully we will return again in the not too distant future!

One more time on my count…
A one, a two, a one two three…

Why does it always seem the past is better
We look back and think
The winters were warmer
The grass was greener
The skies were bluer
The smiles were brighter
Can it be that it was all so simple then
Or has time rewritten every line
And if we had the chance to do it all again
Tell me
Would we?
Could we?

If you are too young and have not heard Gladys sing it, or have just never heard it at all – you can see her sing it live in 1983 by clicking this LINK to open up a YouTube video.